The Churchill Community Foundation, responsible for maintaining Lake Churchill, initiated restoration efforts on the Amethyst Stream Valley in 2013, based on several studies and bathymetric surveys of the lake. The Foundation worked closely with Charles P. Johnson & Associates, Inc. (CPJ) to develop design and construction drawings, which were reviewed by Montgomery County Department of Permitting Services, WSSC Permit Services Unit, and the Maryland National Capital Park and Planning Commission. Prior to the 90% design stage, CPJ also initiated dialog with the Maryland Department of the Environment and the Army Corps of Engineers through a pre-application meeting  held in August 2015.

The purpose of the restoration was to improve water quality in the stream and in Lake Churchill, by creating stable channel geometry and restoring access to the adjacent floodplain. Through the installation of step pools and grade-control structures, erosive velocities were reduced and higher flows are now able to access the floodplain. Restored access to the floodplain will enhance in-stream and riparian habitats, recharge groundwater, enhance the hydrology of existing wetlands, and allow for the establishment of additional, more diverse native riparian vegetation. The Amethyst Stream Restoration addressed resident concerns about property loss and increased the aesthetic and recreational value of this portion of the stream valley.

In late December 2016, the permitting phase was completed. After consulting with CPJ, the Churchill Community Foundation Board hired Angler Environmental, a res company, to do the restoration work and rebuilding of the two pedestrian bridges. Pictures and video can be found on the Churchill Community Foundation Facebook page.  The final part of the project, planting trees and shrubs, occurred in the fall of 2017, allowing the roots of the plants time to grow before freezing weather set in.

Click map for full, high-resolution pdf of the plan. 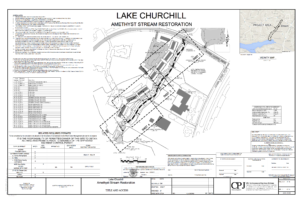 Churchill Community Foundation (CCF) strives to make Lake Churchill a place where members of the community come to enjoy the beauty of nature at a special spot within walking distance of their homes. Lake Churchill is located in Germantown, Maryland.

The board meets the last Wednesday of each month.

Our lake is beautiful! See this and many other photos in our Flickr album and on other Facebook groups.